On the morning of Tuesday August 19th I had an appointment at Bloomberg London with the fellow who directs their internship programs. I'd been introduced to him via email and he had been receptive to offering me a tour of Bloomberg's fancy digs in Finsbury Square in the Islington Borough, just north of the central part of the city. I dressed up in the work clothes I'd brought for the occasion and headed out early on the tube along with the other commuters, feeling like a real Londoner.

Bloomberg's London office was a very impressive place. It rivals every tech company I have been to in California for its pizzaz and perks (an open cafeteria, large open work spaces that were clean and high tech). Its design scheme was centered around massive fishtanks full of exotic fish. I was able to catch Bloomberg's newscast delivered live from their news floor and I left with a better sense of what type of journalism school students make best candidates for their jobs and internships; altogether, a great learning experience for me.

After my appointment in Islington, I wandered over to Leicester Square and got myself a ticket to a London musical. My guidebook pointed out a kiosk in the square where one could get deep discounts. I don't think I got much of a price break, but I wasn't complaining. The choices were the same as I'd expect to see in New York: Lion King, Phantom of the Opera, The Book of Mormon, Cats. I chose Billy Elliot both because I loved the movie and especially its dancing, but also because the story is set in the U.K.. The show was scheduled for 7:00pm, so I had the rest of the day to wander the city.
First stop: Soho, an area in Westminster Borough and part of the West End of London. I learned that there were few public transportation options criss-crossing the area, giving it more of a quiet neighborhood feel. I began with locating the Covent Garden Market, another of London's famous public market places (now trendy, but at one time one of the primary covered food markets delivering fresh produce to the city) and began one of my guidebook's walking tours towards Soho. I bought a warm falafel sandwich from a street vendor (so far, the best food I had eaten in London were sandwich wraps from street vendors) and walked while I ate.

Soho felt a bit like Berkeley, a community that clearly liked being a bit "off the grid", and counter culture. Soho once had a reputation for sex shops as well as night life and film industry, but I found it to be very upscale. There was a fabulous bookstore called Foyles, a full 5 floors of new books and reading spaces, with a cafe on the top floor. From the looks of Foyles, I'd say the book industry is alive and well in London.

After Soho, I headed back to Westminster Castle. I had yet to get any good photos of the traditional Queen's guard. When I had asked Aisha what she wanted from London, all she had said was "a picture of you with one of the red-uniformed guards" so I had a promise to keep.

The problem was, I felt sorry for the young men in those red uniforms. Tourists swarmed them and shot selfies with cell phones, and they worked hard to keep their poses. I couldn't bear to do the same. So, I shot this picture from a distance and went on my way.

Here's a quick video of my bus ride around the city.

By this point it was 4:30 and I was cold and tired, but I was NOT going to miss the theater show. So, I found a Mark & Spencer mini-market across the street from the Victoria Theater that had a seating area on its second floor, bought a salad, and sat down with a free daily newspaper to catch up on the news. Soon enough, it was time for the show.

Take a look at this trailer to get a picture of what I saw that night. It was a really dynamic performance and I loved the music. By it's end, I'd been on the move for 14 hours. I headed on home on the tube and collapsed on to my bed. One last day to go.

London in the rear view mirror 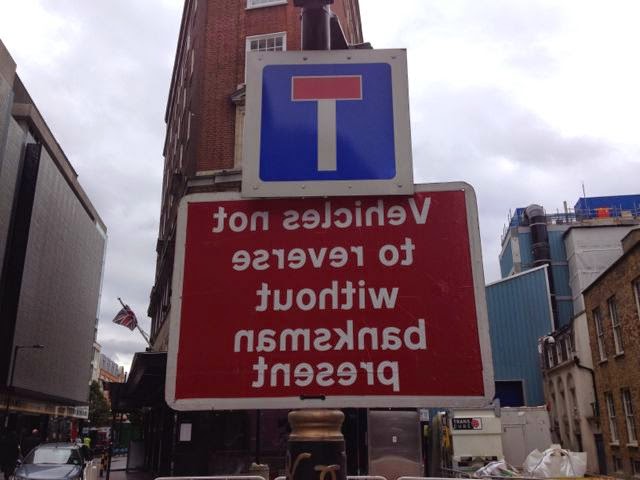 August 17-18 Greenwich and my move to Southwark

I realize this is posted long after my return date - alas, it has taken me ten days at home to find the time and the space to post these final pictures. But I owe it to you all to provide these last few stories to round out my trip.

Sunday, August 17th I took a short Thames cruise to Greenwich. Only a short hour away, the village of Greenwich, in the larger borough of Greenwich,

is a quaint maritime town with lots of attractions making it a popular day trip for tourists based in London. It's main attraction for me was its location at the prime meridian, located at longitude 0°, the line separating the Western and the Eastern Hemispheres. Not a big deal, right? But I must admit there was something magical about it. I was reminded of visiting the Four Corners Monument in Southwestern U.S. back in 1997, where four states meet at one point: Utah, New Mexico, Colorado and Arizona. Standing on the prime meridian I imagined the two halves of the earth sewn together in this one place. The earth felt very small and fragile in that moment. Greenwich is also the place where world time is measured (as in Greenwich Mean Time). The Royal Observatory in Greenwich houses many tools developed for sea navigation in the 17th century.

I walked around the town and ducked in to boutiques to
avoid the rain, which fell about noon and stopped not long after it began. I'd learned to carry a small umbrella, and not let the rainfall deter me. Rain in London seemed a part of the backdrop much like the red busses and the now out-of-use phone booths. A highlight for me was the Greenwich market, which was full of arts & craft stalls and food booths. I was impressed with the quality of the items for sale: hand-turned wood bowls made from green and seasoned locally-sourced lumber and a local photographer selling gorgeous images of England's countryside (yes, I bought a lovely print of a field of bluebells) are just two examples. I bought myself a vinyl purse and a matching lunch sack from one of the stands, passing up all the leather artisans. The market in Greenwich was a highlight from London overall. I highly recommend a stop there.

On Monday, August 18th, I moved from Marylebone North of the Thames, to Southwark (pronounced "suthuk") South of the Thames. In Southwark, I had found lodging through airbnb with a Spanish fashion photographer Carlos and his partner Stephan in a live/work loft, a buzzing place full of people working and hanging out. With a large room to myself I was able to find quiet if I wanted it, but I found that after weeks of solo travel I was hungering for contact, and there was plenty of it there. Carlos had two young Italians working for him, a British friend sleeping on the couch, and two young Chinese women renting another of his rooms, so we were an international lot with plenty to talk about.

Southwark was less posh than Marylebone, but I found it full of public art and bustling pubs. Nearby was the Borough Market, a local farmer's market that was open everyday for specialties such as blood sausage, but also fresh vegetables and fruit, fruit and butter, fresh bread and even large pans of paiella.


Stay tuned for my final London chapter, when I ventured to the Tower of London. I'll post about that on another day. 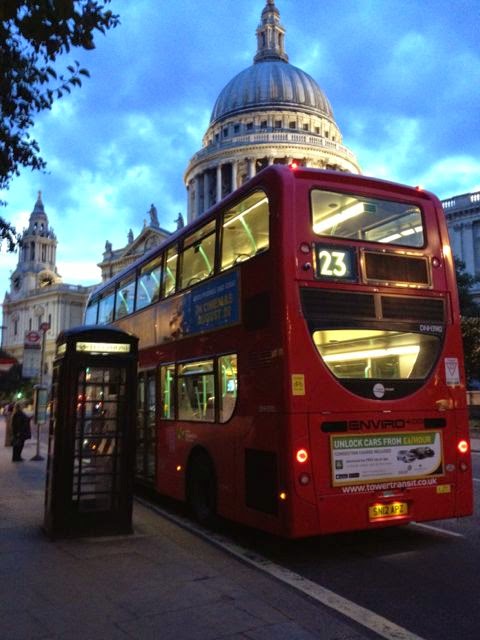 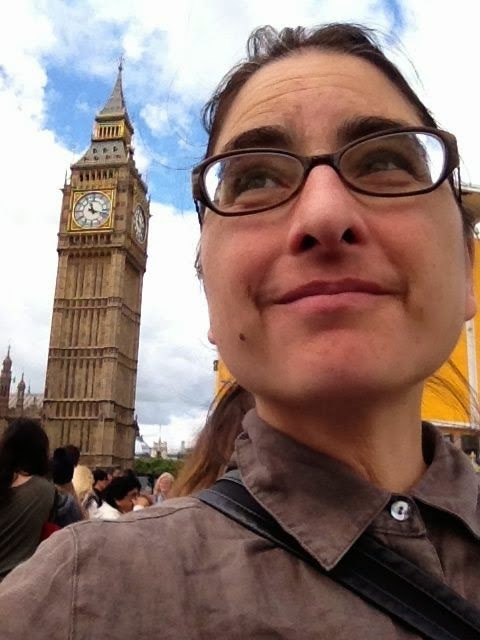 After a long day of travel on Friday, including a 3 hour layover in Athens, I landed in London's Heathrow Airport at about 3:30 in the afternoon. My mother's dear cousin Nader picked me up outside of customs with a small sign with my name on it. It's nice to be recognized when you face the anonymity of traveling alone.

The customs and passport check had been more difficult than I'd expected. They were scrupulous. At least they didn't rifle through my bag.

As someone who most often is the driver when I ride in a car,  I found sitting in the driving spot but riding as a passenger, quite nerve wracking. I kept glancing at Nader driving to reassure myself that I wasn't riding in a driverless car. To make matters worse, I found that central London was full of one way streets, so trying to figure out which lane we should drive in, or turn on to, seemed mysterious. I will never, NEVER, drive in London. Never.

I immediately got a sim card for my cell phone, and bought a week-long transit pass, then I was on my way out the door to explore Oxford Street, which was a few short blocks away from the room that I'd rented. I found Oxford Street to be a bustle - a mix of so many people speaking so many languages. I barely heard any English actually; mostly Arabic, with some Turkish, French and German mixed in. Is this Istanbul or London? Young Arab couples rode on the back of bicycle buggies that were blasting Arab music, and singing along to the music. There were many, many women in Islamic veils, and I passed by cafes where men were smoking water pipes, just like I had done the night before. 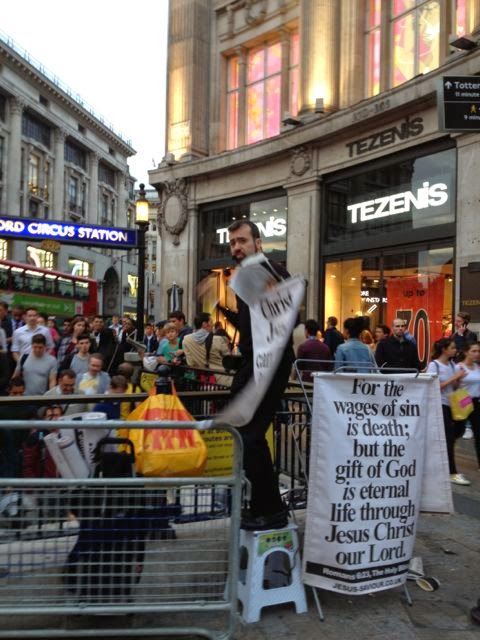 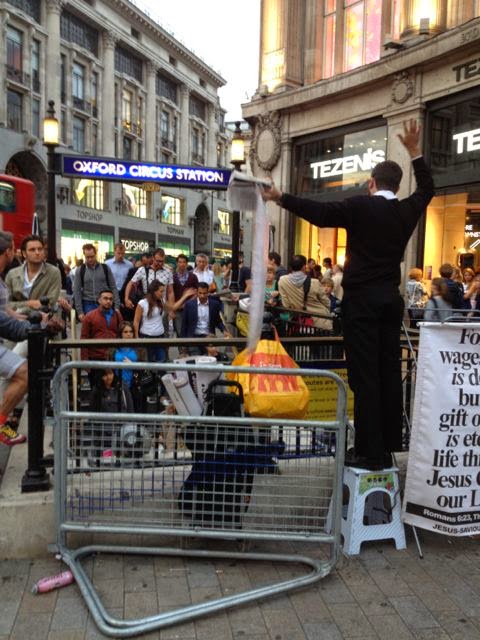 I was really impressed by the area right around my building on Marylebone Lane. Narrow, cobblestoned streets and fashionable clothing stores. And the young men in the pubs, they were all dressed in great looking suits and button up shirts. I really liked the fashion I was seeing.

All the restaurants look popular: pubs and a super fish n' chips place just two doors down. When I woke up Saturday morning I used Yelp to find a great breakfast place and had the most attractive set of poached eggs that I've ever soon, along with a roasted tomato and portabello mushroom, bacon and a sausage. Terrific.

I freely jumped on whatever double decker bus that came by, and got off whenever I felt like it. The line 23 passed by most of the major sites so it was like a low cost London tour! It turned down Regent Street, with its posh shopping spots, and passed by Fleet Street (synonymous with Britain's national press), Trafalgar Square, Leicester Square, and St. Paul's Cathedral. Wow. 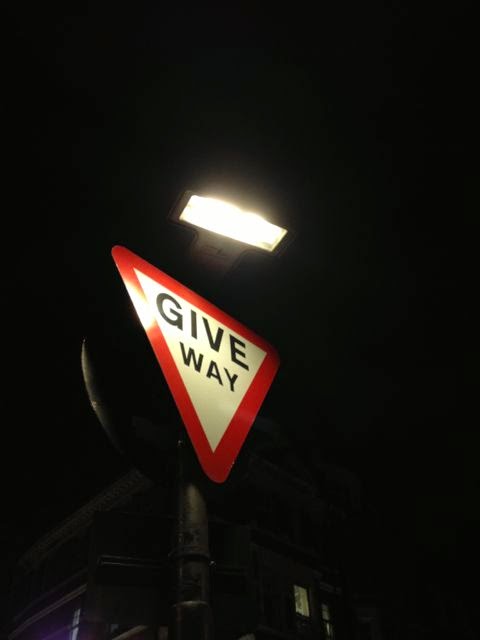 Saturday I visited Harrod's department store, Big Ben, Buckingham Palace, the House of Commons, and the Winston Churchill museum. My feet are aching!
My Aunt's sister, Leila, got in touch with me and took me out to dinner to a bustling Lebonese restaurant. She explained that after Ramadan, many Arabs travel. Those that are wealthy ship their fancy cars over so they can show them off, such as the gold car we saw outside of Harrod's. It was actually gold. I'm off for more adventures tomorrow....
Posted by My Shadow is my Skin at 5:42 PM No comments:

Thursday was my last day in Turkey, and I spent it out and about, mostly in Beyoglu/Kabatas and Sultanahmet. Here are my parting snapshots and a video.

The view of ferryboats from the Galata Bridge. This is a very busy port. One can catch a ferry from here leaving every 20 minutes or so, to most port destinations. 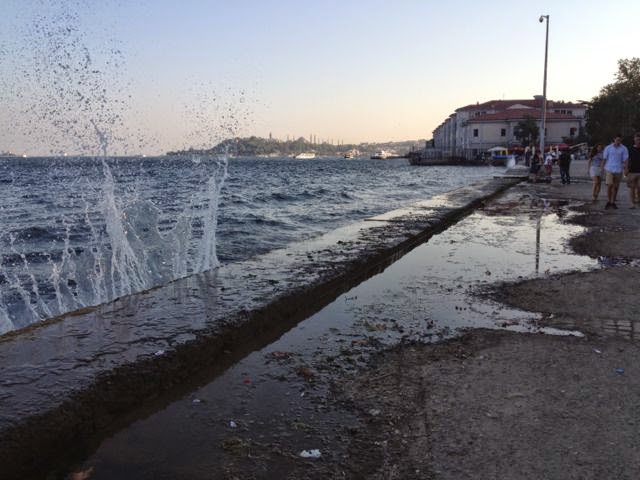 Posted by My Shadow is my Skin at 2:13 AM No comments:

Tuesday, August 12, 2014: Twenty-one Things I will Miss Most aboutIstanbul

Tuesday, August 12m 2014:   Twenty-one Things I will Miss Most about Istanbul (when I leave on Friday)